Discover the region Gastronomic Heritage Made in Castelbriantais

A piece of beef taken from a fillet weighing 300g to 400g with unmatched “tenderness” and taste. According to the dictionary of the Academy of Gastronomes, the Châteaubriant was invented by Montmirail, the cook of François-René de Châteaubriant, whose ancestors founded the town. Montmirail dedicated his recipe to the author of “Mémoires d’Outre-Tombe” (Memoirs from Beyond the Grave).

According to others, this recipe comes from the town of Châteaubriant, renowned for its 19th century cattle farms, and where the most important cattle market in the west of France still takes place.

The meat from the Pays de Châteaubriant has “its” label.
Tradition Bovine de Châteaubriant is a registered trademark (with official quality certification) which belongs collectively to the economic players in the local meat industry.
The Académie du Châteaubriant was created in 1994 and is a gastronomic society bringing together leading local and national figures who want to promote the real Châteaubriant.

You can taste the Châteaubriant:

In 1494, at the time of the Renaissance, Françoise de Foix was born, a beautiful and delicious young girl, who married Jean de Laval, Baron of Châteaubriant, in 1506 .
Her great beauty and intelligence seduced the King of France, François I, who liked to surround himself with the prettiest girls in the Kingdom. Didn’t he say “A court without women is a spring without roses”?
The very beautiful, cultivated Françoise thus became the king’s “mye” (sweetheart) for almost 10 years between 1516 and 1525.
It was in tribute to this Lady, who died mysteriously in 1537, that a chocolate maker from Châteaubriant, created a speciality he named “Françoise de Foix”.

Saint Nicolas symbolized the door, the mid-16th century to 1789, the power of the Baron de Châteaubriant : his audience hall, its officers regulated the manorial rights and dispensed justice. Adjoining the tower served as a prison. This beautiful set still retains the architectural traits inherited many changes from the 16th to the 18th. It is because of them, curiously it is commonly called “new door”. 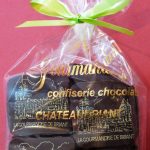