The castle of la Motte Glain

The castle of  la Motte Glain

The Château de la Motte Glain was built by Pierre de Rohan, Maréchal de Gié, from the end of the 15th century to the beginning of the 16th century on the site of the old fortress of the lords of Rougé, an advanced sentinel of the Marches of Brittany facing The neighboring Anjou.

Purchased in 1635 by Philippe Le Loup, Councilor of the Parliament of Brittany, the castle has been in the same family for more than 400 years.

2015: Renovation of the Tower of the Greniers to Dîme.

2016: Renovation of the entrance Châtelet and the round path. 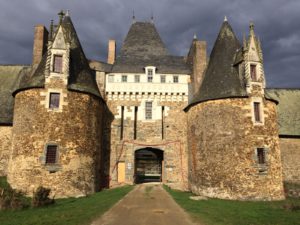 The castle is open for visits from June 15th to September 15th every day from 2:30 pm to 6:30 pm (except Tuesdays), and during the Heritage Days.

The castle can be rented for receptions.

The Quarry of the Fusillés
The Medieval City of Châteaubriant