Discover the region Religious Heritage The Chapel of the Templars

The Chapel of the Templars

A historical and artistic heritage

During the 12th century, the Templars modified this old chapel to make from it the church of their commandery. Thus the primitive wooden arch was supported by thick buttresses and a door was built on the facade. The three roof arches framing this door are worth the visitor’s attention.
Crossbows engraved in stone on each side of this entrance are evidence of the undeniable presence of the Templars.
To the south, a small window illuminated the altar and the two doors, one of which was enlarged in order to allow the passage of hay carts… (The church served as a stable until 1910).
To the north, the wall is slightly deviated to the left. Two ogive-shaped windows were cut through this wall. They are smaller than the original openings.
The far end of the chapel was moved back between the two buttresses. 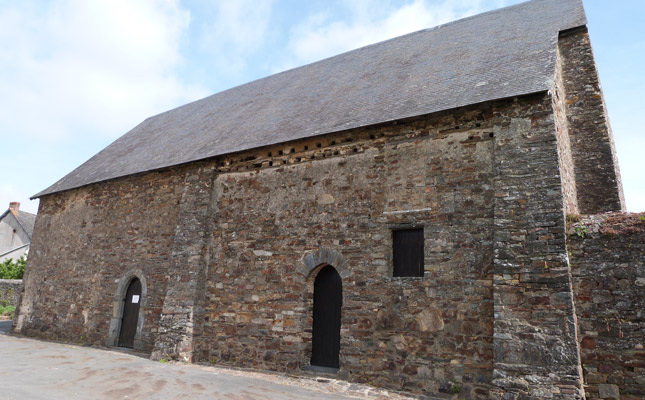 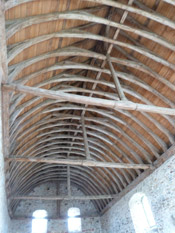 The woodwork construction, cut completely by axe, is greatly admired by  visitors. It consists of twenty-eight beautifully crafted wooden arches. At the end of the sanctuary, the altar was raised by a few steps. The two small recesses that overlook it have something original: the interior, instead of being rounded, is formed of two cut-off corners.
The entire building was subject to utilitarian changes. Indeed, after the disappearance of the Templars, in the 14th century this chapel was assigned by François II, Duke of Brittany, to the parish priest of Saint Aubin.

It was recently restored by the municipality of Saint-Aubin des Châteaux to save this historical and artistic heritage for the commune.

The key is available from the Mairie during the opening hours or at resident’s home at 3 impasse des Templiers.

Free access on Saturday and Sunday and every day in summertime.

The Church of Saint Julien