Discover the region Religious Heritage The Church of Saint Julien

The Church of Saint Julien

After the Norman invasions, the population looked for refuge in the forests.
The commune takes its name from a miracle that is supposed to have happened in its chapel in the 15th century. The town was a stopover on the hard labour route from Brest to Toulon and  usually served as a relay point for the prisoners. They say that one of them, having prayed with great fervour to Saint Julien to grant him a pardon, saw his chains fall, not just once but three times. The news reached Tours, where the bishop, a great believer in the memory of the saint himself, suggested to the authorities of the town, at the time without a name, that they should pay tribute to the martyr by adopting his name. Since the lands belonged to the Lord of Vouvantes, the name of the town was completed with his family name. 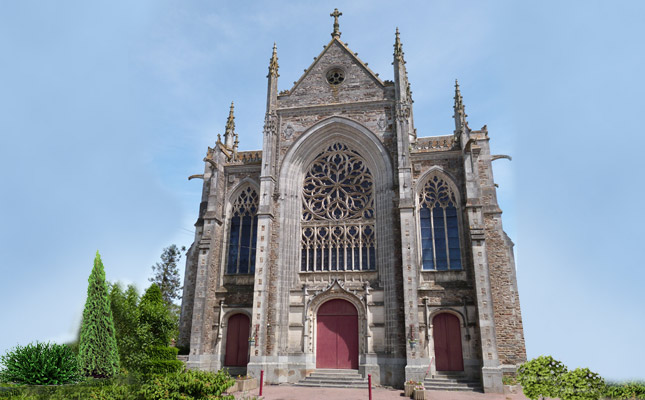 In 1889, a new church, serving as a place of pilgrimage, was built by the architect, François Bougouin. The old buildings, too decrepit and dilapidated, could no longer be repaired. The church in Saint-Julien de Vouvantes is one of the largest in the department after Nantes Cathedral. Since 5th October 2007 it has been registered on the list of Historic Monuments.

At the time the new church was constructed, and because of the sloping ground, a spacious crypt was built to support the choir of the building.  This was designed to be a sanctuary for pilgrimages. Currently this chapel shelters souvenirs from the old church: sculpted items from the 15th century, altarpiece from the 17th century, statues etc. 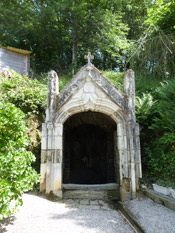 There are 3 fountains: The large fountain said to be Saint Julien’s is known to heal fever, the second said to be for the blind and the third for tasters or those with scabies.

The Saint-Jouin Church
The Chapel of the Templars